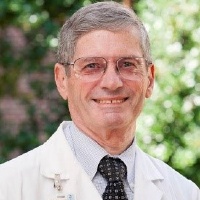 A cardiovascular endocrinologist, Dr. Carey received his MD from Vanderbilt University. He is a leader in the hormonal control of sodium excretion and blood pressure. In the 1970s, he first identified a functional intrarenal renin-angiotensin system independent of the circulating system. He pioneered the expression, signaling mechanisms and physiologic actions of dopamine D1-like receptors (D1R) in vasculature and kidney, helped identify a renal D1R-G protein coupling defect in hypertensive humans and spontaneously hypertensive rats (SHR) and generated data critical for the introduction of fenoldopam, a selective D1R agonist, in human hypertensive emergencies. Dr. Carey is commonly regarded as the father of the angiotensin (Ang) type-2 receptor (AT2R). He identified its expression, distribution, regulation, preferred endogenous agonist (Ang III), principal signaling pathway (bradykinin-nitric oxide-cyclic GMP) and physiologic role anchoring the “protective arm” of the renin-angiotensin system that opposes the detrimental actions of Ang II via AT1Rs. Recently, he identified a primary renal AT2R defect in SHR leading to sodium retention and hypertension. Dr. Carey also discovered the importance of extracellular renal cyclic GMP in mediating pressure-natriuresis.

Author of over 450 scientific papers, Dr. Carey is an elected member of the National Academy of Medicine, the Association of American Physicians and the American Society for Clinical Investigation. He served as President of the Endocrine Society and the American Clinical and Climatological Association. He was Vice-Chair of the 2017 ACC/AHA Blood Pressure Guideline Writing Committee and was senior author and chaired the 2008 and 2018 AHA scientific statements on resistant hypertension, respectively. He made major contributions to the control of aldosterone secretion in normal and hypertensive humans and primary aldosteronism, and co-authored two widely recognized clinical practice guidelines for the disease. In addition, Dr. Carey transformed academic medicine during his highly successful 16 year medical school deanship at the University of Virginia.